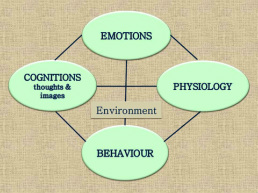 Cognitive Therapy was developed by Aaron Beck (1979) as a shorter-term therapy with a strong self-help orientation. Cognitive Therapy (considered '2nd wave' CBT) followed on the heels of the pre-existing Behavioural Therapy ('1st wave'), and these were later combined to form the CBT we know today.  CBT has a sound evidence-base and enjoys continuous research and development, and it is the therapeutic approach most commonly recommended by the National Institute for Health and Care Excellence (NICE) for a range of psychological problems.

CBT therapists are interested in the interplay between cognitions (e.g. thoughts, images, memories) and emotions (anxiety, low mood, anger etc). We also attend to the behaviours employed as a response to 'negative automatic thoughts', uncomfortable feelings or perhaps  physical sensations. For instance, it is natural to want to keep a distance from what we dislike or fear  by avoiding certain experiences or places; we may drink too much in order to feel less anxious or sad, withdraw from activities when we feel low, or engage in compulsive behaviours such as checking or washing in an effort to try to calm our worrying thoughts and feelings. When there is a real and present danger, avoidance may be a helpful or even necessary strategy.  But when a feared outcome is in the past, or is unlikely and hypothetical ('what if...?'),  we find that those same strategies become restrictive, reducing the quality of our lives now and actually adding to our suffering.

Behavioural changes are usually practiced in small steps, initially as 'experiments' that are reviewed in therapy.  Between session tasks (experiments, logs, worksheets etc) extends the therapy process between appointments, which can shorten the overall time in therapy and provide an opportunity to  take things forward oneself - and that helps to maintain change when therapy has ended.
ACCEPTANCE AND COMMITMENT THERAPY (ACT)

In recent years, I have been privileged to offer clients a variant of CBT known as 'ACT' (Acceptance and Commitment Therapy), which has its own ever-growing evidence base. Rather then waging war on our 'distorted' or 'irrational' beliefs (e.g.  by challenging/disputing them), ACT teaches ways of responding differently to our own troubling feelings and thoughts (compassionately and from an observing perspective) .

ACT, considered a '3rd wave' CBT approach, was developed by Steven Hayes, Kelly Wilson, and Kirk Strosahl (1989) and is now practiced internationally.  It is an empirically-based therapeutic approach that uses mindfulness-based principles (e.g. acceptance, here and now awareness, observer perspective) alongside the behavioural change methods used in traditional CBT, such as working towards goals using graded (small steps) encounters with previously avoided experience.  The aim in ACT is to increase 'psychological flexibility' (considered the key to psychological well-being) and thereby to enhance the richness of our lives.  The process is guided by one's own core values, which become increasingly central when making choices and deciding on actions. 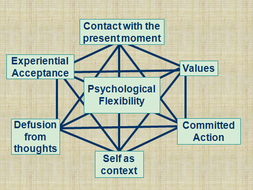 ACT identifies six, inter-related processes that are seen as central to our psychological well-being; therapy will probably focus on all of these, although with a different emphasis from person to person. The skills you will learn include: